This page details other peoples aircraft that I have helped with in one way or another - that is positively or negatively! 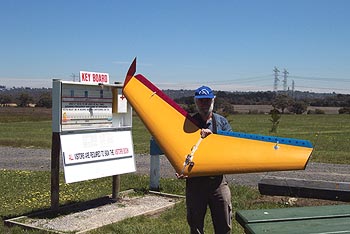 The 1.8M Big "Zagi" Wing was built by Professor John Bird and was in part the inspiration for the Duigan Flying Wing. Construction is foam core covered with brown wrapping paper. It was built for slope soaring and flat-field flying using a bungee. After several succesful flights including those with an FMA Co-Pilot it lay in mothballs for several years.

Converting the Big Wing to electrical power was considered prior to the construction of Duigan but not completed due to other distractions including those associated with the formation of the Aerobotics Group and the acquisition of the Aerosonde "Lawrence Hargrave".

In January 2008 I constructed a simple tractor fuselage with an AXI 2820/10 10x6 folder prop and 3s LiPos. CG calculations were also done for a pusher configuration which is more common on wings but safety, and curiosity, won out on this occasion. John and I have again fitted an FMA Co-Pilot to protect against the odd orientation issue. The original winglets could not be found so some temporary ones were constructed from a surplus core-flute sign.

The inboard servo scheme with snakes which I copied on my Zagi are problematic. The snakes going to the elevons follow an arc and have a significant amount of slop countered only by the load in flight on the reflexed elevons. Rapid manoeuvres particularly those encountered in stalls show up the problem. I also taped the airgap between the elevon LE an the wing reducing high pressure air leakage. Solutions for later (?) are proper film hinging and top-pull outboard servos.

First flight was 29 January 2008 with performance in-line with a Motocalc prediction of a modest but acceptable climbout and an endurance of about an hour at cruise. Turned out to be a pussycat climbing out straight and level from a gentle hand launch. The Co-Pilot function tested OK but was not needed as we took advantage of the booming thermals. Apart from some motor issues an excellent day.

"Don't Panic" aircraft built by Russell Thomas a fellow member of CAC donated to Professor John Bird as a potential basis of a design for indoor flight. The design is by Mal Pring of South Australia and was published as a free plan in Q&EFI January 2008 (Traplet Publication MW 3298). Not a thing of beauty, very slightly undercambered wing with just a touch of reflex on the last third of the chord. Claimed to be capable of high-speed flight without tucking under.

Apparently it was not pleasant to fly with numerous repairs evident in Russell's. A quick MAC calculation showed that the suggested CG at 165mm back from the LE apparently gives it a negative stability margin. It would be frisky and hands-on all of the time. The CG with a computed static margin of 5% should be at 145mm.

I have bolted in the power train from my Cockatoo. Mass is 362gm and Motocalc computed static thrust is 481gm. So if things go bad I can choose upwards, or more likely just crash gracefully.

Flights 16 June 2008 excellent. Still nicely aerobatic and a pussycat to fly at low rates. CG at 145mm works well with no up trim required - elevons following reflex curve. Passed it back to John Bird for him to have some fun.

Given to John by David Hipperson after a major front end crumple.